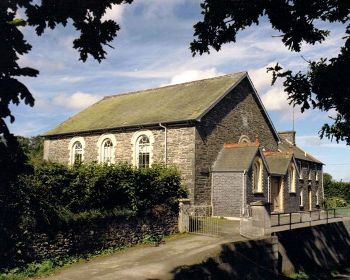 Llwynpiod chapel stands at the side of the Sarn Helen Roman road (B4578) between Llanio and Tyncelyn in Ceredigion. The chapel has 23 members, including 4 elders.

The chapel’s origins date back around 350 years to a nearby farm called Llwynrhys. A congregation of nonconformists would meet there regularly at a time when religious nonconformity was not tolerated.

By the end of the 17th century, Llwynrhys was one of the Cilgwyn group of Presbyterian churches. Phylip Pugh (1679-1760) became their leader and was one of the most influential figures of 18th century nonconformism. In 1753, he paid for a new chapel to be built in Llwynpiod to replace the old meeting place in Llwynrhys.

In 1762, Revd Thomas Grey (1733-1810) was appointed minister of Abermeurig and Llwynpiod churches. He was a close friend of the Methodist reformer, Daniel Rowland,Llangeitho,

The present building was built in 1803 and the bicentenary celebrated in October 2003.

Recently, a display board was placed outside the chapel describing the history of Cilgwyn Walk as part of Ceredigion Faith Trails.