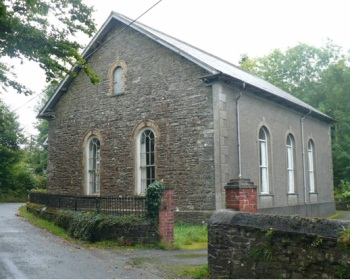 Yr Hendre, former home of Reverend Phylip Pugh, gan be seen from the chapel courtyard. He was once the joint minister and leader of Cilgwyn Circuit, before the Welsh denominations were formed. He was also the mentor of the young Daniel Rowland and his advisor on preaching content and style. It is also said that he licensed Yr Hendre farm buildings as a place of worship and, indeed, some believe that they resemble a place of worship. There was a pulpit in the farmhouse until half a century ago.

Out of the work of Pugh and his co-ministers and the Cilgwyn Circuit (5 sites with at least two at any given time) grew capel Penial. The church split in the early twentieth century, leading to the establishment of Blaenafon church. The churches were reunited in 2007, a century later.