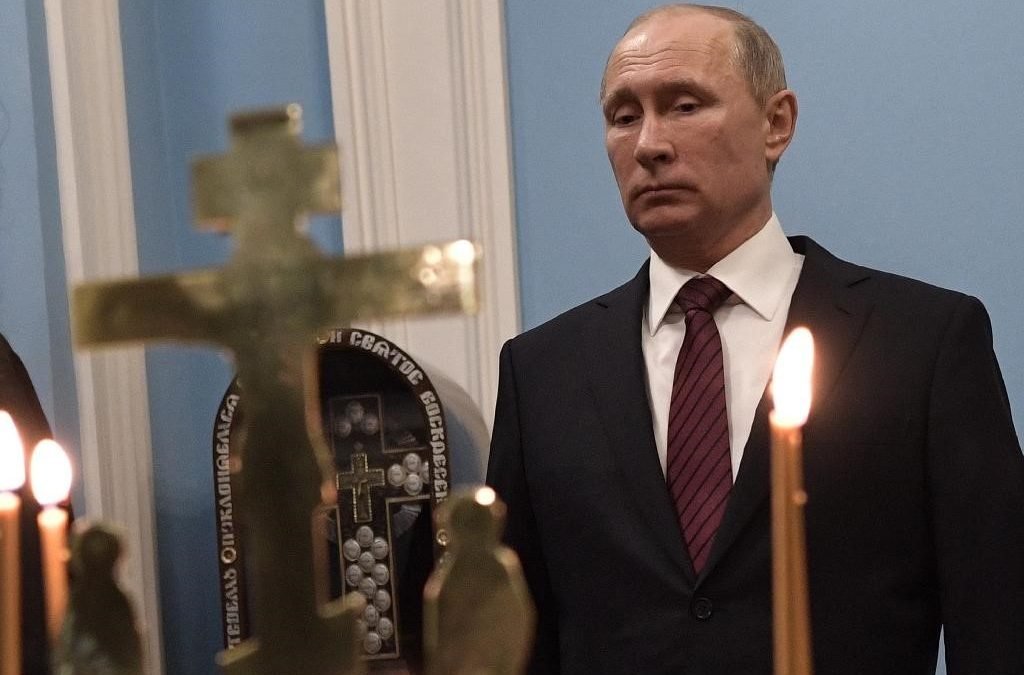 This morning Steff Morris was leading the PCW worker’s online devotions. The passage was Mark chapter 7 which tells the macabre story of the murder of John the Baptist. As we read I was surprised again at quite how close Herod seemed to come to faith. We read that,

“Herod feared John and protected him, knowing him to be a righteous and holy man. When Herod heard John, he was greatly puzzled; yet he liked to listen to him.”

Imagine being a follower of John and hearing that testimony? Imagine sharing it in prayer meeting. Imagine hearing someone on the street criticising Herod. Someone would curse him, call him a traitor or a pagan or a hedonist. ‘No, no’, you would reply, ‘you’ve got him all wrong. If you would only ignore the mainstream media and listen to what I’ve heard you’d know he’s (almost) a believer!’

Until, of course, you find out that Herod got drunk and brutally martyred the man of God.

It’s worth bearing Herod in mind when we hear what is being said about Vladimir Putin at the moment. I don’t mean the criticism, there’s plenty of that. I can’t remember a time when a world leader has been so completely condemned. Normally, in my experience at least, there’s always been a vocal minority opposing war: be it in the Falklands, the Gulf or the Balkans. But right now, even China seem to be uneasy about ‘Vlad the Invader’.

But inevitably, if it hasn’t already, a contrarian position will begin to appear. You might see it on social media, particularly perhaps, from Christians claiming that we have it all wrong. Despite appearances, they will say, Vladimir Putin is worth supporting because he is ‘a Christian’.

You might be surprised to hear that but a quick search of the internet reveals plenty of people willing to testify on his behalf. Take, for example, an interview in 2001 with the Archimandrite Tikhon (Shevkunov) of the Sretensky Monastery. He said:

Putin is really an Orthodox Christian, really, and not nominally. He confesses, receives communion and is aware of his responsibility before God for the ministry entrusted to him from on high and for his immortal soul.

Combining the modern Russian state with past forms, Putin has undertaken a huge effort to connect it to the heavens. The construction of churches, the reconstruction of destroyed parishes, monasteries and the revival of Russian shrines has become an urgent matter for Putin.

For the dark, soulless landscape that was imposed on Russia after 1991 – one dominated by nihilism, anger, and nonsense mercantile scams – Russia was in a condition completely unsuitable for any future development. Anything built in this context, any laboratory or university, immediately plunged into the abyss of a toxic lifestyle.

After all that has gone on in the last few years 2001 seems like ancient history but this quote seems to me to be really important.

Here is a world leader seemingly unashamed to go to church and do the things Christians do. To call him a modern day Herod would be unfair. Putin appears to be much further along the road than Herod. Herod was puzzled by John but Putin seems committed to Jesus. He attends church, takes communion, feels called, invests in the construction of churches and is rolling back the years of atheism. Wouldn’t we love to have a leader who said these things?

But Jesus tells us to be ‘crafty as snakes as well as innocent as doves’. We must be willing to look a little deeper. And, whatever was said twenty years ago, we see more recently that Putin is no friend of the Christian.

Relevant magazine writing a few years ago says: “If you are a Russian citizen in 2018, it is currently illegal for you to share the Gospel with a friend in your home. It’s illegal for you to invite others to your church. VKontakte— the Russian equivalent of Facebook—can’t be used to spread anything that might be considered “evangelism.” In fact, all religious dialogue has been banned outside of churches and other religious sites. On the street. Online. Even in your own home.

I’ll be honest, I don’t like straying too far into the internet. I’m suspicious of a lot of  things I read because it’s hard to find sources or know who is really writing and what their biases are. But the evidence of what’s happening in Ukraine tells me that whatever he professes, Putin’s actions are not consistent with those of a godly ruler.

Like Herod, I imagine Putin has an interest in spiritual things. He probably does feel moved as he sits in an Orthodox Church service, humbled as he takes the mass, even perhaps like a servant of God as he considers the churches he has recommissioned after the era of Soviet atheism.

But like Herod Putin is not convinced by Christ. When the moment comes to do the right thing; to ignore the lust in his own body and the temptation to show off to power, neither man can resist. Herod was happy to show an interest but when the moment came he decapitated John rather than bow to Jesus. Do we see anything different in Putin?

Let’s learn a lesson from John the Baptist. He was willing to stand up to Herod. He wasn’t seduced by his authority or frightened of his power. He spoke truth to the ruler of the kingdom because he believed in a greater ruler of a greater kingdom. Let’s not get caught up in pointless arguments defending tyrants and dictators and defending the indefensible just because they claim to be one of us. Let us be as Jesus commands: As innocent as doves, but as crafty as snakes.

May we pray for wisdom as we search for the truth in events.

May we be careful about what we read and what we share.

And may we pray for leaders to not only listen to God but humbly respond to what He says.