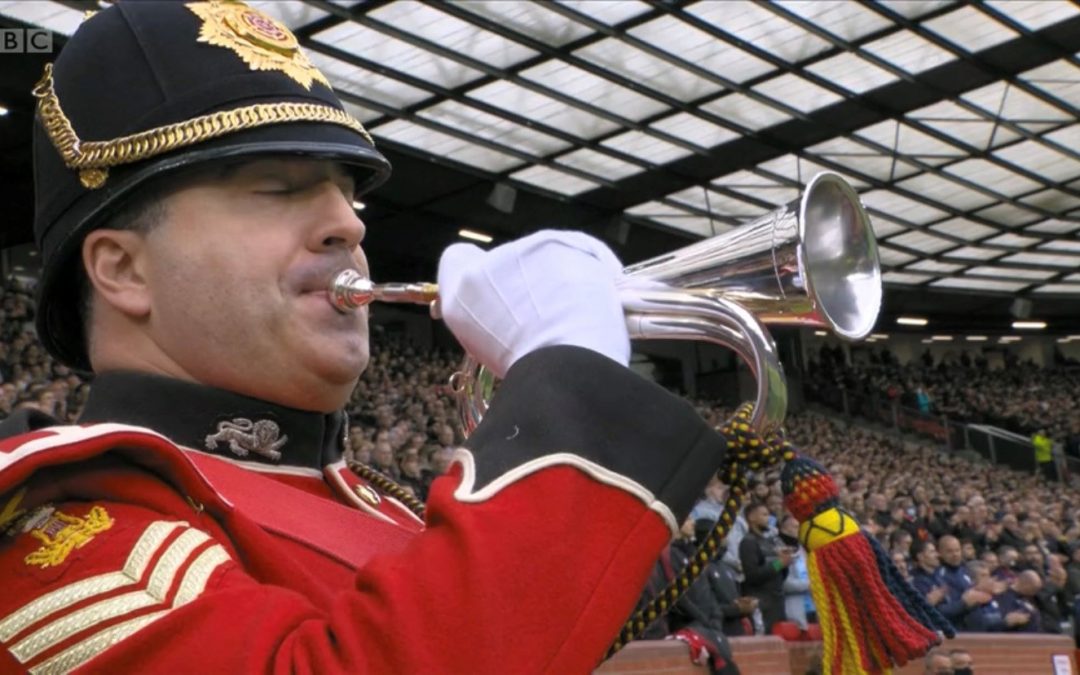 Sunday night’s Match of the Day opens in Manchester. It’s the weekend before Armistice Day and time to observe the act of Remembrance. The players stand around the centre circle where a carpet bearing a poppy is unfurled. The Band Sergeant Dave Pickles from the Duke of Lancaster’s regiment prepares to play the Last Post.

Suddenly large parts of the crowd burst into noisy applause. The commentator makes no comment. Indeed there’s a sense of  approval that it is being ‘well observed’. And then we rush on to the action lest anyone actually focus on the important over the immediate. This is 21st century remembrance.

Not being a fan of either Manchester club the result wasn’t important to me but the clapping really bothered me. Why was it happening? What does it mean that we no longer observe silence at football? When did we decide silence isn’t golden?

Well, longer ago than we might realise. In 1997 as Diana’s hearse was driven through London, observers burst into spontaneous applause. A few years later fans at Old Trafford and Maine Road clapped as they remembered their heroes’ George Best and Alan Ball respectively. When Gary Speed died there was some confusion with the club manager in one dugout applauding while the other remained silent. Since then it has been customary to clap a departed player or club official.

We might have thought Remembrance was different but thousands broke into applause at Old Trafford on Sunday without comment from the British Legion (some years ago they criticised football teams in the Scottish leagues but seemingly they’ve given up trying to maintain the silence) so it may not be long before the silent memorial disappears from public life.

To me it all seems a bit incongruous. I can understand clapping a player like George Best. His talent had people on their feet, his joy was in prompting the crowd to cheers when creating or scoring a goal. But Remembrance is about remembering those who made a sacrifice. It remembers those who died, those who were injured and those who have lost someone they loved. Clapping death and destruction, sacrifice and sorrow seems a bit tone deaf.

But of course, it goes deeper than that because we clap to drown out the silence. For lots of people we are simply not used to silence. We wake up to radio, put a CD on in the car, work in a noisy workplace, switch on the TV when we get home, and listen to an audiobook as we drift off to sleep. There’s never any time for silence so when it comes, it’s like an assault on the senses. There’s an irony to the act of remembrance; it’s a forceful act. It makes you stop and it demands you think. For two minutes you can’t escape it. It clutches hold of you and demands you let time hold sway over you.

And let’s be honest, it’s uncomfortable. Our minds wander, we consider our posture and wonder if we’re doing it right. We feel sometimes, by the end like it’s been closer to two hours than two minutes. But, in those moments, we consider the reason for the silence and compose ourselves again. So maybe this is part of the reason for the applause. Compared to silence, clapping is the easy option.

Going deeper still, I don’t think we can stand the silence because it reminds us of the ultimate silence. In the past our culture saw and understood death and even had a belief structure that centred around hope in a risen saviour and an eternal future. Now, as we hear less of the Christian message we have less understanding of what might come next. Unsurprisingly our culture cannot bear to reflect on that for two seconds, let alone two minutes.

A few years ago a Liverpool player was caught smirking during a minutes silence for those who died at Hillsborough. He was vilified by almost everybody because he had broken the spell. He had not been able, perhaps not been capable, of approaching the act of remembrance silently. He was too immature. And yet on Sunday thousands of people dodged the mature grown up response and chose instead the less demanding memorial act. I’m sure many did it out of good intentions but we should still grieve it as a sign of sadness in our culture. As the sports writer Barney Ronay wrote: “Whatever the reason, it does seem a shame that we’ve come to this. A minute’s silence inside a packed and excitable stadium is still an unbearably potent memento mori”