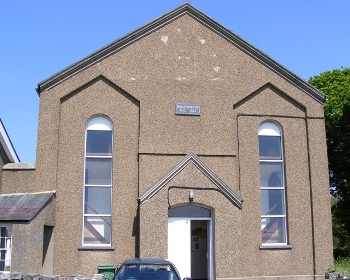 Translation of a Welsh Hymn

of Treborth in Caernarvonshire.

The verses below represent the first, second and third verses

from an original version which consisted of seven verses in total.

The omnipresent God
(Fills heaven and earth withal),
Is to a soul in need
The closest Friend of all.
Nearby He hears our every cry:
“ ‘Tis good that I to God draw nigh.”

The Lord, He changes not,
Inconstant though we be;
Despite man’s fickleness,
The same always is He.
The Solid Rock – though floods be high:
“ ‘Tis good that I to God draw nigh.”

Enriched in glory, God
(His wealth endures fore’er)
Sustains each living being,
With boundless will and power.
A drop from Him fills sea and sky:
“ ’Tis good that I to God draw nigh.”

When I was a child going to Pencaenewydd Chapel in Eifionydd Thanksgiving Monday was a big day. The ‘Prayer Meeting’ was important. One farmer participated every year, and read the same hymn every time. Hymn 61 in the old Hymn Book, 76 in “Caneuon Ffydd“; ” The omnipresent God” (Mae Duw yn llond pob lle) A Hymn by David Jones, Treborth. Delyth G. Morgans says in “ Cydymaith Caneuon Ffydd “; “It is clear that the hymn was based on Psalm 73:28 ….”

28 But it is good for me to draw near to God:
I have put my trust in the Lord God,
that I may declare all thy works.

For me, there is something special in the last lines of each verse. In the first verse we have the assurance that God is there, available every day.  He is so close we can hold hands. I liked the innocence of this sentence, about God’s hand, which I read in a prayer recently. “It’s a big hand and in it there is a place for all our little hands.”  The farmer at the Prayer Meeting knew that, and I thank him for making the hymn a familiar hymn to me and one of the hymns that still gives me the assurance of the closeness of God.

In the second verse the hymnist says that God is as strong as the rock, the rock that we can trust in all weathers. There is more than one rock that David Jones could be referring to. As David Jones was a minister on the banks of the Menai Straits I like the suggestion that it is “a rock in the middle of the Menai Straits where one of the columns of the Britannia Bridge stands….“. A very striking illustration to describe God’s might.

In the third verse the image of the sea shows us how great and powerful and generous God is. Through his goodwill, the hymnist says, God gives generously to us and all living things in his world.

The hymn depicts a close, strong, great and generous God. Who can not trust in Him?

Prayer: Thank you, Father, for the rich experiences of life, experiences that we may not have fully appreciated at the time, but which have been of great value to us on our spiritual journey over the years. Help us to use them to maintain and strengthen and deepen our faith day to day, Amen.