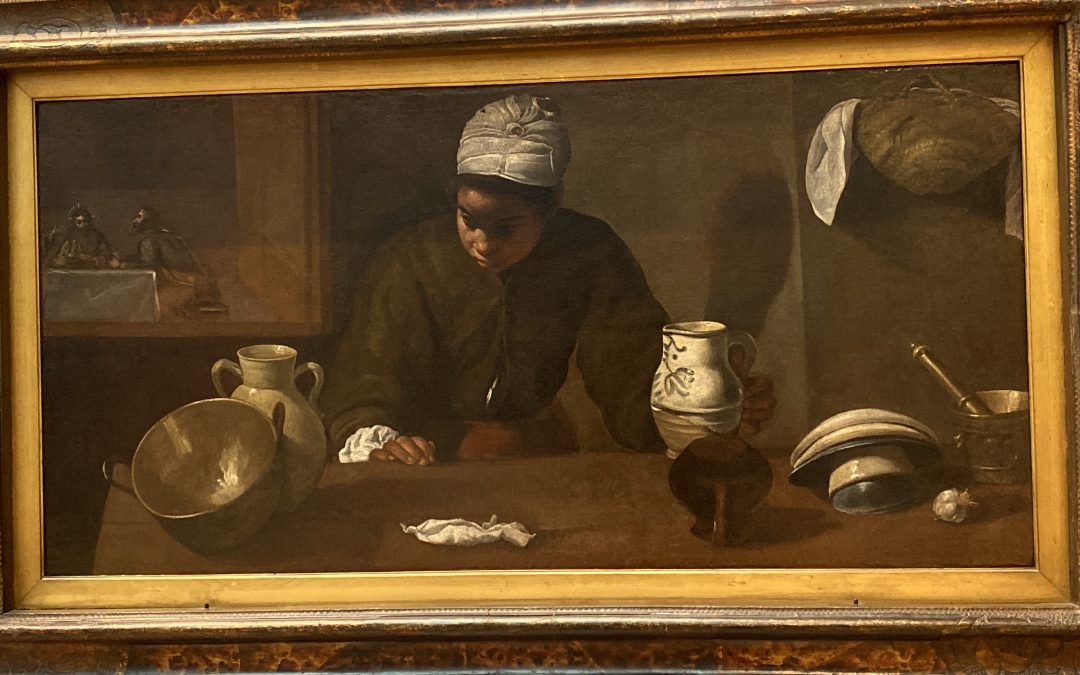 Of all the Bible’s many stories, an all-time favourite is the Supper at Emmaus. As a number of great artists have made the story the subject of their paintings, so Luke 24: 13 – 35 has been an almost annual theme of my Easter Sunday evening sermons for over thirty years. Just as in art there are varied depictions of the story, so my sermons have by no means been repeats, and this Easter evening’s sermon at Ewloe Green was no exception.

The painting by Spanish artist, Diego Velazquez (1599 – 1660) that hangs in the National Gallery of Ireland is slightly unusual in that he gives prominence to a Moorish servant in his portrayal of the house in Emmaus, and if you are familiar with the Dining Room at Coleg Trefeca, the scene in the painting is not dissimilar to the layout there.

Just as in that room in Emmaus where Jesus broke bread at supper and revealed to Cleopas and his companion that He was the Risen Christ, so many significant and enlightening conversations must have taken place over meal-times at Trefeca.

Perhaps the painting is a gentle reminder that important as some of Trefeca’s diners may be, those who serve in preparing the food are not unimportant or unworthy of notice. It was a memorable aspect of the character of the late Revd John Stott that when he attended a conference he would pause to acknowledge with genuine appreciation and interest those who served him in trivial ways.

In his Kitchen Maid with the Supper at Emmaus Velazquez’s Moorish servant girl is shown at work in the kitchen. At the hatch she is shown listening as Jesus and His two friends talk in the background at the table in the other room.

Perhaps in overhearing the conversation she was as heartened by the realisation that Jesus is Alive as the two were who were motivated to retrace their steps to Jerusalem to share the Good News with the disciples.

The Welsh poet, George Herbert (1593 – 1633) once wrote how ‘All may of Thee partake’, and as the two discovered in their Emmaus home, it is ever true that Christ offered Himself once for all for the sins of the world, and that all who listen to Him believing discover their footsteps lightened and joy in their hearts.

Risen Lord, as You drew near to the two on the Emmaus road

and warmed their hearts with the sense of Yourself, we pray that the glow of Easter truth that has dawned upon us and warmed our cold hearts these past few days will continue to motivate us to love, follow and serve You.

As dawn ushers in a new day walk alongside us, and as each day becomes far spent we pray that You will come and abide with us for Your Name’s sake, Amen.

Teach me, my God and King

In all things Thee to see

And what I do in anything,

To do it as for Three