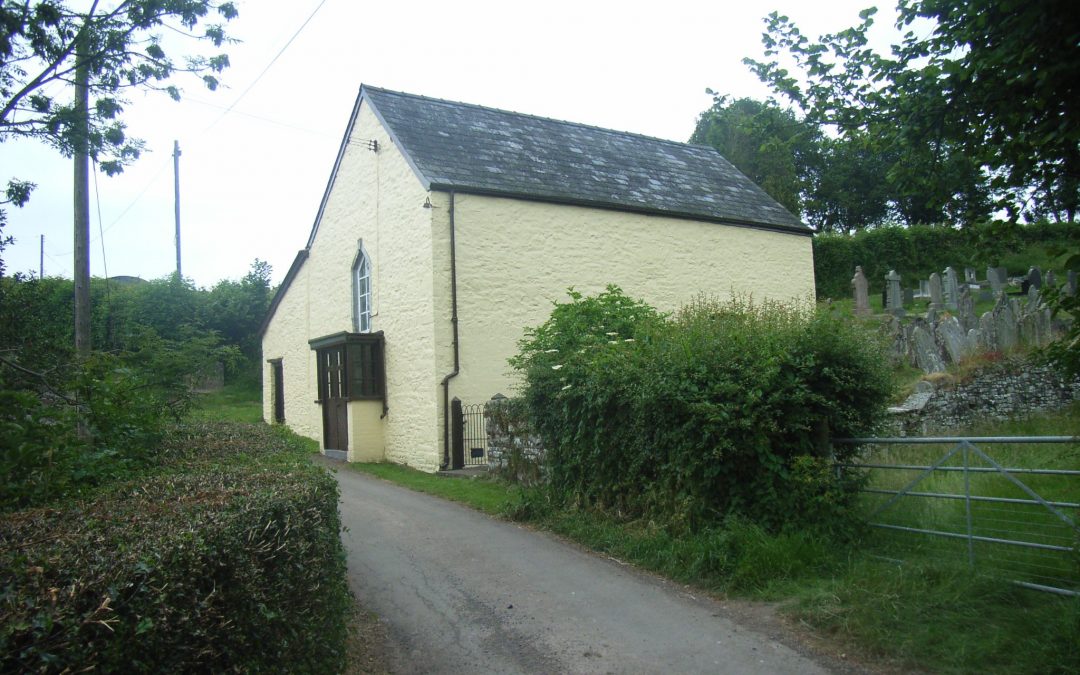 This is Salem in Fforest Coalpit, about four miles north of Abergavenny, the other side of the Sugar Loaf. I moved to Fforest when I was ten years old and attended the Sunday school and Services there, later attending Whitefield in Abergavenny. I have many memories of the place from that time. I remember John Tudor coming to preach at a Harvest Service, he almost knocked over one of the oil lamps on the side of the pulpit. One of the things that stick in my mind is his illustration of salvation as a free gift you don’t have to do anything to gain it, it is free like the toy in a Rice Krispies box you just have to take it. It was from Fforest I had my first encounter with Trefeca in the late sixties. We would go for the weekend; it was very different then.
Fforest has a long link with Trefeca, the lane was once the road which led to Cwmyoy, and I like to think that Howell Harris used this route as he travelled. The cause was started by Howell Harris and they met in a house nearby.
Here is an extract from the Treasury of September 1883 which tells us more about Salem.
“Early, very early, in the history of Calvinistic Methodism, Monthly Meetings were held at Cwmyoy and Forest Coalpit. Howell Harris paid many visits to these places. There lived, however, at the Forest, during this period, an extraordinary good man named William Jones. For sincerity and an earnest desire to extend the Master’s kingdom the last century did not possess a better man. He faithfully served the evil one till he was 21 years old, when his heart underwent a change. His love for the souls of his neighbours was such that he went expressly to Trefeca, and had an interview with Lady Huntington, and urged on her ladyship the paramount importance of sending her students to the neighbourhood of the Forest to preach the gospel to his ungodly neighbours. “How came you,” asked her ladyship, “to know the Lord?” ” It was the Lord that found me,” replied William Jones. Her ladyship was so pleased that her students paid periodical visits to the Forest. There was a building known as ” the playhouse ” in the locality, and the gentry from Abergavenny and around would come in carriages on the Lord’s Day and indulge in all manner of games and ungodliness. It is recorded that this was like fire on the skin to William Jones, who ultimately purchased the playhouse, and thus put an end to such wickedness. He was born in 1738, a few years after the conversion of Howell Harris and was undoubtedly on intimate terms with that man of God. He travelled with Harris on many occasions, and very likely stood by him when assailed by the mob. He faithfully attended the Monthly Meetings, and the success of the gospel lay very near his heart. He was eminent for his piety, and died as he lived, near to his Master. He did not forget the carrying on of the Cause after his death, for he left as an endowment for the chapel the place where he lived”
I think that it was him or a relative who gave the land for the church to be built in 1816.
Howell Harris could not have done the work he did without the help of such men as William Jones whose life and witness was a testimony to the free grace of God which he and Howell Harris preached. We pray that the Lord would raise up others like William Jones today.
Prayer.
Lord you are a great and glorious God who does wonders in the lives of men and women. Thank you for the example and witness of your people in the past. We look back on the work your hand has done in the past. We thank you for those who preached your word despite opposition and were faithful to you.
We thank you that your gospel does not change and that the free gift of salvation through the atoning blood of our Lord Jesus is still freely available today. Oh, that you would raise up today those who know and love you to be bold in proclaiming the great gospel of our glorious God just as our forefathers did.
Lord, in keeping with all your righteous acts, turn away your anger and your wrath from us. Our sins and the iniquities of our ancestors have made your gospel and your people an object of scorn to all those around us.
Now, our God, hear the prayers and petitions of your servants. For your sake, Lord, look with favour on your church. Give ear, our God, and hear; open your eyes and see the desolation of the people that bear your Name. We do not make requests of you because we are righteous, but because of your great mercy. Lord, listen! Lord, forgive! Lord, hear and act! For your sake, my God, do not delay, because your people bear your Name. Amen