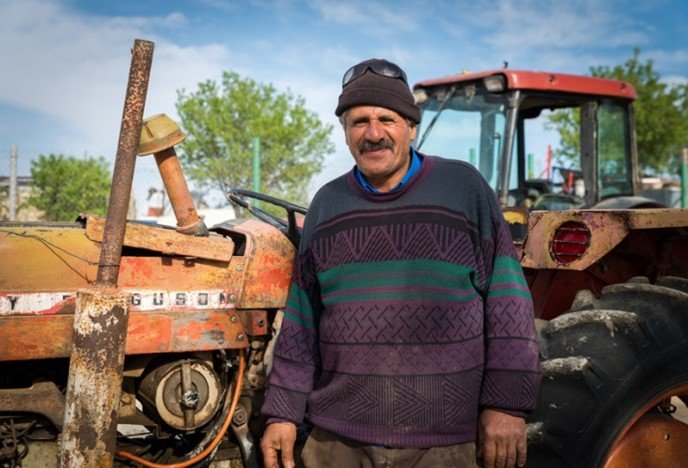 ‘Do not let evil defeat you.’

295 Palestinian homes were demolished in 2021 which meant that 895 were made homeless, in the tragic situation between the governmet of Israel and the Palestinians. Its part of Israel’s policy to occupy parts of the land given by International Agreement and Law to the Palestinian people. This is the ‘Occupation’.

Daher Nassar is trying to defend his family farm from being occupied by Israel. It’s a large farm compared to most Palestinian farms. Its 100 acers of fruit trees – almond,figs,apples,olives – and has belonged to the family for well over 100 years. Bethlehem is visible from the farm and most of Daher’s family live in Bethlehem.

Also visible from the farm is the 400 mile wall that surrounds the West Bank and also visible is one of the  four Israeli Settlement that has been built in that area. In May 2021 –and not for the first time – Israeli military vehicles entered the farm and uprooted and destroyed  tens of trees. There is also an ongoing court case between the Israeli Army and Daher for the possession of the land, but Daher has the kept the deeds safely. The intention  is to occupy the farm through destruction of property and threats. It should be said that the Daher’s famiy has no connection whatsoever with Hamas or any other militant group. Israel claims that the purpose of the wall and any occupation is to make Israel safe from militant Palestinians.

How should, and how does, Daher respond to the constant threat to his  family farm and his people ?

Daher and his family are Christians and belong to the Orthodox Syrian Church, perhaps the oldest church in the world. ( See Acts 11 ) But for every tree uprooted and destroyed by Israel, Daher has planted new trees and has done so more that once. But he has also gone beyond the call for revenge that is so familiar and acceptable  in the Middle East.

Years ago Daher named the farm ‘Tent of nations’ and has invited people from all parts the world, from different cultures and religions , which has included Muslims and Jews, to spend some time working on the farm,. It is,in other words, a family farm  with a wider vision of the world and humanity that builds community rather than build walls.

As part of the continuing threats, the Israeli army placed large boulders blocking the entrance to the ‘Tent of nations’, but Daher responded by erecting a large stone by the entrance with the words ‘We refuse to be enemies.’ 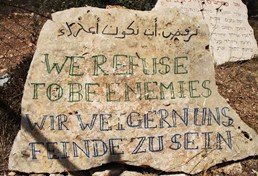 We thank you, Creator of the universe and of all nations,
for those who are instruments of Your peace –
bringing hope of reconciliation where there is conflict,
hope of understanding where there is alienation,
to plant seeds of hope where there is the lifeless soil of  hatred,
and  to witness in word,deed and worship
to the road that Jesus,our Peace, walked
from Bethlehem to Jerusalem.

We pray for Daher and the Tent of Nations
and all who are working and witnessing
to bring a lasting peace between Israel
and the Palestinians.