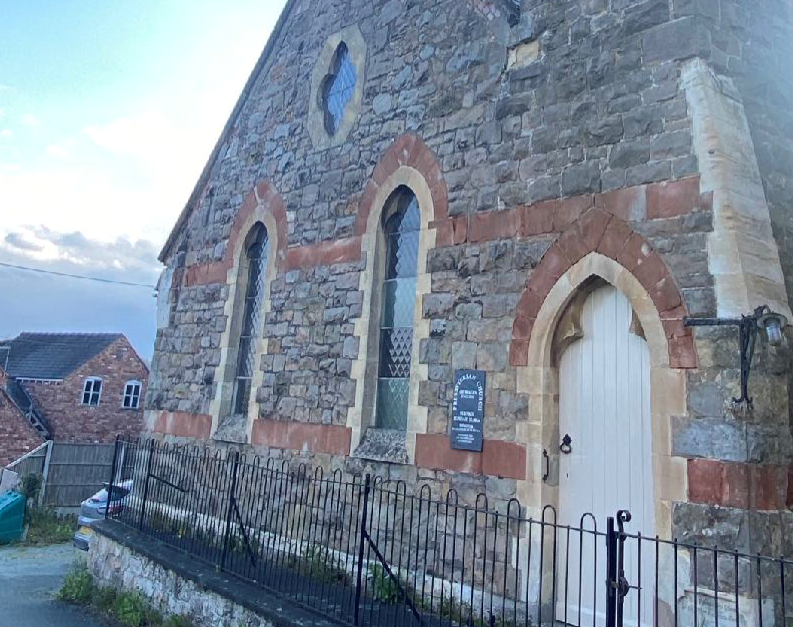 Set almost on the border with England Llanymynech is the last Calvinistic Methodist chapel that the traveller passes on leaving the rolling hills of Montgomeryshire to enter the land-locked county of Shropshire. Sadly after 156 years with only one elder and two members remaining the heartbreaking decision was made to close at the end of 2020.

Revd Diane Stirling who served as the church’s last minister has recorded the chapel’s story with the help of Mrs Paddy  Martin, and the late Revd Stanley Gunning and the late Mrs Ironwy Gunning for the historical background to the Chapel.

The foundation stone for Llanymynech Chapel was laid by Edward Cleaton Esq. of Llanidloes in June 1864, and the building was opened on 24th and 25th November in the same year.  Revd William Foulkes was the first Minister and he built up the congregation and Sunday School.  The Davies family at Melverley Hall were great supporters of the cause in Llanymynech.  Robert Cadwalader led the first Sunday School and a successful week-night Bible class for young people.  Revd William Foulkes was succeeded by Revd Richard Jones in 1876 who had studied Music and Hymnology and was a member of the Welsh Hymn Book Committee. He left in 1890 and after a brief inter-regnum was succeeded in 1892 by Revd J Davies, who only stayed for a year.  Revd G.O. Evans was then Minister for ten years during which a new schoolroom was built on land given by Sir Henry Tyrwhitt-Wilson, which was later extended on land donated by Mr and Mrs Evans Beechfield and Mrs Lewis of Elm Tree Farm.  He also had oversight of Gwern- y -Pant chapel.  A library was started for the Sunday School.  In 1903 Revd Owen Matthias became Minister and stayed for twenty years.  The Manse was built during this time.  The Primary School was built at Carreghofa, opening in 1911, and all the head teachers up to at least 1964 were active Presbyterian members.  Tabernacle Chapel, Arddleen was added to the pastorate when Revd Oscar Symmond took over as minister in 1925.  He stayed until 1946.  Revd Stanley Gunning took over as Minister in 1948 and remained until his retirement in 1983.  Highlights of their ministry in Llanymynech included the centenary celebrations of 1964 and the Presbyterian Association in the East meeting which they hosted in 1983.  Revd Stanley and Mrs Ironwy Gunning stayed in the area and were tremendous workers in the chapel.  Mr Gunning continued to preach and serve the local chapels well into old age. They are both  remembered with affection even today by members in Llanymynech, other chapels in the area and the wider denomination. Following Mr Gunning’s retirement the ministers were Revd Aubrey Lewis (1984 -1990), Revd Sion Gough Hughes (1992 – 1998), Revd Myfanwy Davies (2001 – 2004) and finally  Revd Diane Stirling from 2008 until her retirement in December 2020.

It is with deep regret that the chapel has closed. In recent years there has been a Spring coffee morning, Christmas coffee morning, and Harvest Supper following the Harvest service initially on a week-night and later after the Sunday service.  There was also a history club once a month on a Monday evening.  All these events were well attended, and regular services have been held on Sundays, together with several baptisms and family services. Unfortunately numbers have depleted in recent years due to the loss of faithful elderly members but Llanymynech Chapel will always have a special place in the hearts of those most closely associated with the chapel.