The Church is not Animal Farm, We don’t labour in vain 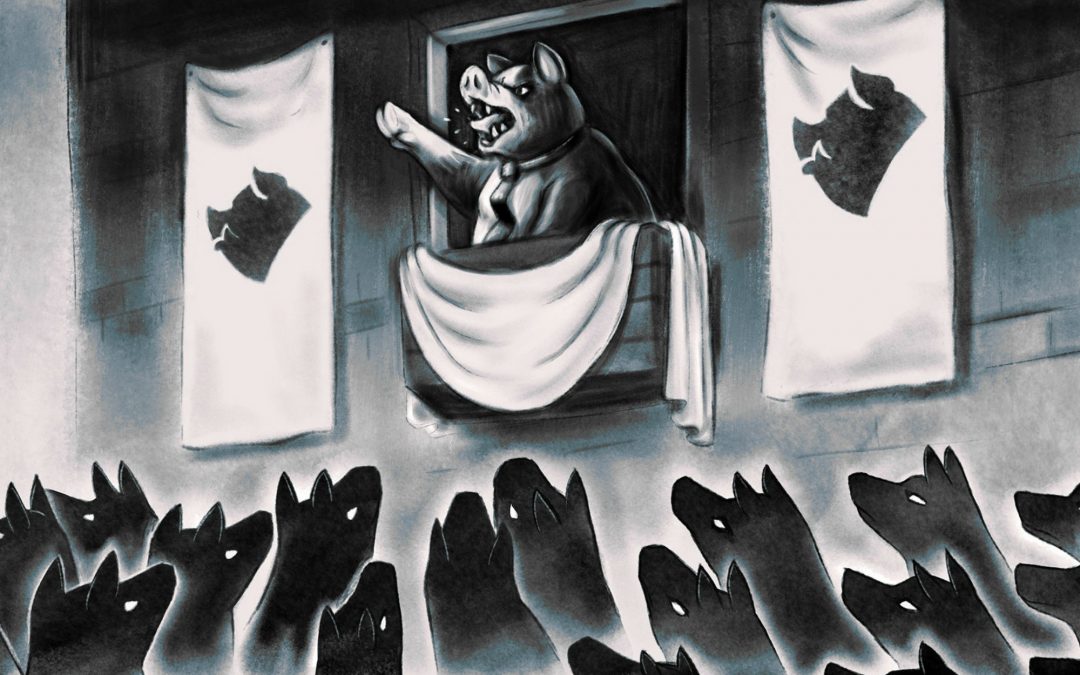 To the tune: ‘O My Darling, Clementine’

Beasts of England, beasts of Ireland
Beasts of every land and clime
Hearken to my joyful tidings
Of the golden future time

Riches more than mind can picture
Wheat and barley, oats and hay
Clover, beans, and mangel-wurzels
Shall be ours upon that day

For that day we all must labour
Though we die before it break
Cows and horses, geese and turkeys
All must toil for freedom’s sake

We all know the book Animal Farm don’t we? At least we’re all aware of the parable of how the animals overthrew the farmer and took over his farm? How they instituted a kind of communism where “all animals are created equal” even as Napoleon and the other pigs overthrew the Major, took control of the farm, and declared that while “all animals were created equal, some were more equal than others”

Currently our middle child has been reading the book at school and is delighting in marching around the house singing the song Beasts of England at the top of his voice. I was helping him do his homework the other night and we were trying to answer the question: “Why do the animals like the song Beasts of England? To what emotions does it appeal?” My middle son wasn’t sure so I asked him “well think about it, why do we sing hymns?”

I wanted him to think that they were singing a song of hope for the future. That the time now would be tough but there were better times to come. But then I started to wonder. Am I (and are we) as misguided as those dumb animals in Animal Farm who naively brayed and honked and whinnied their hymn even as the pigs who ruled over them sat in comfortable armchairs drinking brandy and smoking cigars?

The philosophers that inspire the French Revolution certainly thought so. Baron d’Holbach mourned that, “religion has ever filled the mind of man with darkness and kept him in ignorance of the real duties of true interests”. Voltaire believed that  “every sensible man, every honourable man must hold the Christian religion in horror.” And Diderot speculated gruesomely that “Man will never be free until the last king is strangled with the entrails of the last priest.”

200 years later in the Paris riots of 1968, student protestors daubed graffiti on the walls that said Savez-vous qu’il existent encore des chreteins? (Can you believe some people are still Christians?)

Now in the twenty-first century, plus ca change.  Our culture assumes that clergymen like me are either hopelessly heavenly minded or horrible hypocrites. Meanwhile churchgoers like you are lumped in with morris dancers and steam train enthusiasts as people who are trying to keep a dying tradition alive.

So are they right? Are we trying to hold on a to a discredited idea? Are we singing hymns of hope in the face of overwhelming evidence to the contrary? Are we people to be pitied?

It’s a great question and one that Paul deals with head on in 2 Corinthians 15. He agrees that

“If only for this life we have hope in Christ, we are of all people most to be pitied.

Yes, says Paul, if we are hoping in something imaginary then what a terrible waste. We have put hope in something that didn’t happen and now dream of something heavenly that is not going to happen. “If Christ has not been raised, your faith is futile; you are still in your sins. Then those also who have fallen asleep in Christ are lost.” Isn’t it tragic? No hope for us or those we love and hope to see again.

“But” he says, in verse 20 “Christ has indeed been raised from the dead.”

To those French Revolutionaries, to the Marxist-Leninists, Atheists and Secularists. To those who mock us and scorn us and pity us, Paul says, don’t pity us, because Christ is risen, he is risen indeed, Hallelujah!

At which point we kind of come to the end of the argument. The unbeliever will doubt, the believer will, well, believe! It’s a matter of faith.

But the Christian can say we’re not stupid. We know that there are hypocrites in positions of leadership. We mourn when churches turn aside from the truth and follow some other gospel. We recognise that suffering poses serious questions and that we have no easy answers. We admit it— there’s no doubt we sometimes doubt.

That’s the difference between us and the animals in Animal Farm. They sang of something they hoped for but had no experience of and they worked fruitlessly to achieve it. We sing about something we know. Mystically, miraculously, marvellously, God has made himself known to us in Jesus Christ. We cannot explain it entirely but we know it to be true. As Paul concludes in that magisterial argument in 2 Corinthians 15:

But thanks be to God! He gives us the victory through our Lord Jesus Christ. Therefore, my dear brothers and sisters, stand firm. Let nothing move you. Always give yourselves fully to the work of the Lord, because you know that your labour in the Lord is not in vain.