The Greatest Cosmonaut And The Great Commission 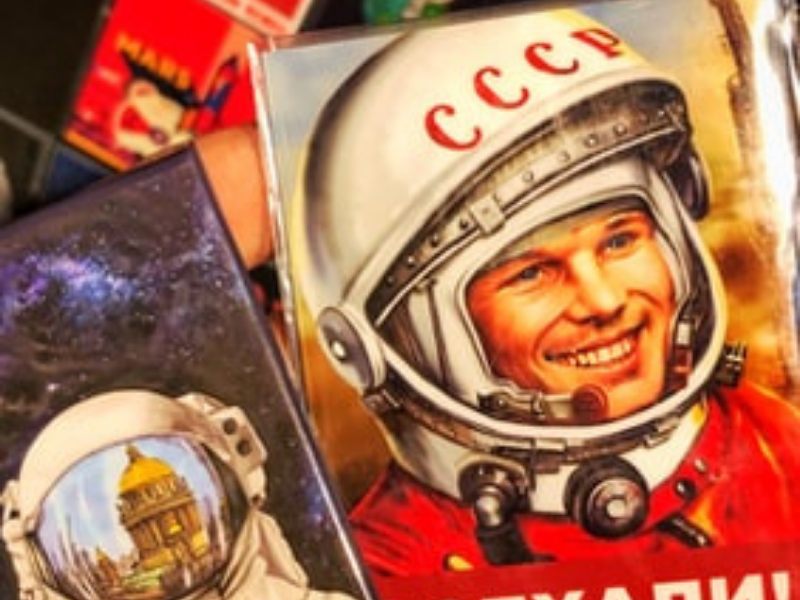 The story goes that in the 1960’s NASA spent many years and millions of taxpayer dollars developing a special ‘space pen’ that uses nitrogen-pressurized ink cartridges to work in zero gravity, in a vacuum and at extreme temperatures ranging from -50 F to +400 F. The Russians used a pencil.

Of the million questions scientists asked as the USA and USSR worked feverishly to get a man into space one seemingly foundational one was this: does a spaceman need to be able to fly his space rocket?

A photograph in the book Beyond: The Astonishing Story of the First Human to Leave Our Planet by Stephen Walker demonstrates that both sides came up with very different answers. The contols of the American Mercury capsule are complicated; dozens of dials and buttons and a complicated looking yoke leave it resembling the controls of a modern Airbus jet. The controls in the Soviet Vostok capsule appear comical by contrast — just four dials and a control stick. Walker says that the American astronauts were given two years training with manual controls before they were sent to space. Gagarin and the other cosmonauts were given a week.

The reason for this was based in the thinking of the the two systems. The Americans in Mission Control were well aware that things could go wrong and that the whole world would be watching when they did. In Star City the only concern was with putting the 100 trillion atoms that comprise a human being into orbit in order to claim victory in the space race. Thus everything was automated, science and technology would get the rocket into orbit, science and technology would get it back. Whether it did so with the cosmonaut alive was less clear but, should something go wrong, the system would cover it up.

It would be wrong to suggest that the Soviets didn’t care what happened to the individual spaceman, it’s clear that they had an emotional attachment (particularly between Gagarin and mission controller Sergei Korolev). Nonetheless there’s a clear difference between how those two competing systems weighed up the value of each individual spaceman. In the run up to April 1961 the Soviets debated what might happen to the cosmonauts once he was up there. He would be beyond reach. What if something went wrong with the rocket? Shouldn’t Gagarin have a chance to steer himself home? Those in authority decided that an emergency override system be installed. But what if Gagarin defected and tried to fly to the West? Those in authority decided he should not be told the override code (1-2-5) until he required it. But what if he needed the code because he had lost radio contact? Ultimately, those in authority reached the decision that he should have the code in the rocket but that it should be placed under his seat so that it was difficult to reach!

As the cosmonaut was being strapped in and prepared for launch, one man felt Gagarin needed the code number. Ivanovsky whispered the code to him. This “ might have landed him in prison had it been discovered. But Gagarin’s response was unexpected. “You’re too late”, he grinned, Gallai’s already told me!” So, it transpired, had Kamarin. So had Korolev!”

When a cause is important it can be difficult to keep sight of the individual. If we have a position of power we can be tempted to overwhelm the individual or overburden him, micromanage or mistrust her. And when it comes to playing our part in God’s kingdom how much more do we feel this? We see far too regularly stories and situations where individuals have been mistreated leading to disaster. It makes thinking strategically about church and her kingdom work very difficult.

Some people will instinctively feel that church should act in a similar way to the old Soviet Union. That it should place a high premium on leadership, control and planning. That those in authority should be involved in all levels of decision making and that problems and difficulties should be hidden or excused away for the sake of appearances.

But Jesus method of leadership is strikingly different. For, although he lays down clear commands for what ministry should be — “Follow me and I will make you fishers of men” there’s an enormous freedom in how that fishing should be done.

Matthew 10 gives us maybe the most complete understanding of this. In the chronology of this Gospel these are new disciples. They have been called and they have heard the Sermon on the Mount. But after that, Jesus sends them on their way.

‘Do not go among the Gentiles or enter any town of the Samaritans. Go rather to the lost sheep of Israel. As you go, proclaim this message: “The kingdom of heaven has come near.” Heal those who are ill, raise the dead, cleanse those who have leprosy, drive out demons. Freely you have received; freely give.

That’s an enormous commission and as we read on we see that he commands them to do or not do certain things but broadly they are free to conduct their ministry as they wish, aware that trouble and persecution will come (I am sending you out like sheep among wolves) but that this is not to deter them because ‘At that time you will be given what to say’.

The more famous commission comes at the end of the Gospel where the parameters are limited only by the limits of the 25,000 mile circumference of the globe, ‘Go into all the world…’

It’s a strikingly different attitude to the Soviet approach. The Soviets were going into the unknown. They feared uncertainty and put their trust ultimately in chance. The Christian can rest in a quite different attitude. We trust in a God of providence, we work for God who knows the future and we build a certain Kingdom on a cornerstone we know.

Let’s take confidence in these things as we step out in faith to build the Kingdom Jesus called us to using the ingenuity, talent and gifts that God has graciously placed in us for his glory.